It took awhile to see this movie. Actually I saw a plot synopsis line and that almost deterred me completely. Marry Me with Jennifer Lopez and Owen Wilson was in the Redbox and I picked it with no doubt. I could say criticisms about the movie on whole, still generally speaking I think it’s a safe romantic comedy with a really unusual story. I was just brainstorming about how the entire film could be remade, especially including a more edgy film score. Since some of the cinematic transitions really impressed me with the dichotomy of worlds colliding between the two lead stars, yet honing in on the “Hallmark” feel-good melodies and musical embellishments took me out the coolness of the premise in the message. I thought there was too much pop music too, including performances for me being ostracized from the scene, however I understand the way it sets up everything that makes the vibe feel real. I never really paid much attention to Jennifer Lopez before and found her quite lovable. This is also a challenge I think for Owen Wilson and he made it look easy. The other supporting stars all held what could have been a disaster together like concrete with many other things the viewer could pay attention to throughout. 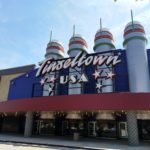